What is the next move for oil prices? Is it a recovery back to the $110 five-year high of September 2013, a relapse to the $26 five-year low of January 2016, or will they linger around the $50 mark? What affects oil prices? Is it politics, economic fundamentals, or are there structural changes happening in the industry that are affecting the prices? Those have become recurring questions asked daily by business people trying to take their next strategic business or personal decisions.

Oil producers are suffering greatly, financial markets have also had their share of losses, and consumer confidence is low. All these factors hinder economic growth and ultimately affect almost everyone.

The average person requires a simple explanation of the forces affecting oil prices and their impact on daily life. But first, let us introduce the major superstars of the oil industry; those are nations that are either major producers or consumers of oil. They will impact prices by changing production levels, consumption levels or through their choices and selection of trading partners.

Exhibit 1: Major Oil Producing and Consuming Countries as of 2015

From Exhibit 1 above, we can see that the USA’s oil consumption in 2015 exceeded its production by around 10 million barrels per day, which means that the country still needs to secure steady imports at whatever price charged by suppliers.

This gap which was higher in the past, started shrinking in 2009 when the USA’s energy imports started declining steadily (Exhibit 2), although their economic growth remained fairly stable at an annual average GDP growth of 3.5% (Exhibit 3).

In addition to the above, and thanks to advances in extraction technologies, shale oil has recently become accessible at economically viable costs. This has allowed the US to tap into its 36 billion barrels of proven reserves, a big part of which is in shale oil form. The term shale oil generally refers to any sedimentary rock that contains solid bituminous materials called kerogen. Traditionally, the shale has been surface mined like coal and heated until an oil-like substance called kerogen turned to liquid and oozed out. But this is an expensive, energy-hungry, and carbon-intensive approach. The MIT Technology Reviews of 2009 revealed that “…companies such as Royal Dutch Shell have developed ways to tap the oil in situ, by drilling boreholes that are thousands of feet deep and feeding into them inch-thick cables that are heated using electrical resistance and that literally cook the surrounding rock. The kerogen liquefies and gradually pools around an extraction well, where the oil-like fluid can easily be pumped to the surface”

Economic feasibility of oil depends on the cost of extraction relative to the market price per barrel. According to a survey by the RAND Corporation, the cost of producing a barrel of oil initially ranged between $70–95. This estimate considered varying levels of kerogen quality and extraction efficiency. Shale oil started becoming economically recoverable with existing technological abilities only when oil prices soared to the $90 to $100 level. Since then however, USA producers invested in technologies for shale oil production and shifted from above ground to underground processing rendering shale oil economically viable at market prices in the $50-60 level. What does all this mean? The USA will become self-sufficient in a few years by tapping more aggressively into its proven oil reserves, the world’s largest, as their oil-shale resources hold three times as much crude oil as the whole of Saudi Arabia.

Arguably, shale oil was the main economic trigger for the non-controllable oil price decline that started in August 2014. At the time, major oil exporting countries expected this price drop to serve as a mechanism to eliminate shale oil producers and small players from the market, thus maintaining their control over the price. It is true that, many producers did not survive the prices downturn but, unexpectedly, the downward pressure on oil prices persisted, dropping to $26 per barrel, the lowest price in 10 years. It is also argued that the steeper decline was mainly driven by political debates and alignments. In the meantime, most of the shale oil producers who did not exit the market permanently were patiently waiting for oil prices to bounce back so that they could reboot their rigs back into action. And now, every time oil prices exceed the $50-60 level, those producers who have their rigs ready to produce again flood the market with oil, bringing the cost back down to the $50 range.

Can OPEC countries cut production and push prices up?

OPEC member countries produce about 40 percent of the world's crude oil. Even more important to global prices, OPEC's oil exports represent about 60 percent of the total petroleum traded internationally. OPEC member countries often utilize their huge production capacity to influence prices. During 2015 and 2016, OPEC countries were producing around 32 million barrels of crude oil per day. In many of their meetings, OPEC countries led by Saudi Arabia (which by itself produces more than 33% of OPEC’s oil) tried in vain to agree on cutting production levels as they realized this to be a major factor in achieving a rise in oil prices. A crude output freeze by OPEC members seems unlikely and is amazingly complex, because many of the countries involved lack the motivation to commit to the freeze. Even if OPEC countries agreed to cut production levels, would the agreement be honored?

The oil industry is an oligopoly where a small number of players dominate production. Often in such industries, when competitors agree on a course of action, they do not honor their agreements. This is in line with the prisoner’s dilemma in game theory which shows how two completely rational individuals might not cooperate, even if it appears that it is in their best interest to do so.

In the prisoner’s dilemma, two criminals who committed a crime together are arrested and imprisoned. They cannot communicate, are separated and held in two different cells. The prosecutor lacks sufficient evidence to convict them on the principal charge and, without further information, will only be able to convict them on lesser charges carrying a short time in prison. So, without informing the other prisoner, the prosecutor offers each one the same bargain: Each prisoner is given the opportunity to betray his partner by testifying against him and, as a reward, the one who betrayed would be set free but his partner will be convicted on the principal charge and will face a long time in prison. These are the possible outcomes:

While the most rational choice for our prisoners would be for both of them to remain silent, it is by no means guaranteed and betrayal will often take precedence.

It is worth noting that, in line with the prisoner’s dilemma, OPEC has often produced more than agreed but the effect on price was limited in the past due to high demand compared to supply. However, with the rise of shale oil and the re-entrance of old players into the production fray, the leeway that existed in the past has been eliminated and discipline must be maintained scrupulously to avoid wild volatility and a continued drop in prices.

The bright side and future outlook

In recent Months oil prices started rising timidly and are expected to continue to rise. Some analysts believe this increase to be due to one-time events and reactions to rumors rather than to a structural and fundamental change in oil economics. Regardless of the reasons, stakeholders are becoming more positive which may in turn generate a favorable herding behavior by investors and market players.

Below is a list of recent events and presumptions which contributed to the recent increases in oil prices: 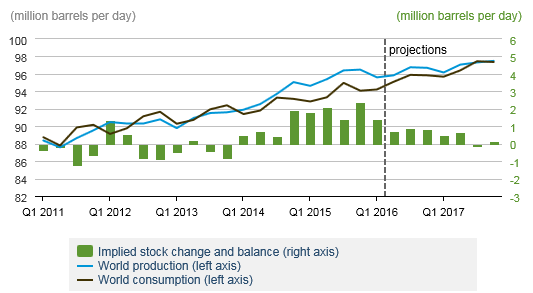 With the existing resistance levels experienced by shale oil producers in the USA, the reluctance by OPEC member countries to cut production, the unintentional production decline of recent Months and the expected consumption increase by developed and emerging countries, it would be difficult to predict the direction oil prices will take. I believe however, that oil will not reach to outlier prices of $26 and $110, but will rather stay in the moderate range of $60 to $70 for the foreseeable future.