Whether chatting with finance or non-finance professionals, every so often the term goodwill arises. Being a visual person, I grasp the reaction on their faces demonstrating a positive feedback and a sense of affirmation that goodwill on any entity’s financial statements reflects a solid position and good performance.

Naturally, the dialogue might evolve to further define the meaning of goodwill as they know it, and the typical answer is usually: the entity’s reputation, predictions relating to customers, location, and brand name.

Not so long ago, my answer for such a query was the typical answer, until I learned more about goodwill, questioned this equivocal terminology and concluded that it could be converted by standard setters into what we may call “badwill”!

The formal definition of goodwill, as defined equally by all financial reporting standards under multiple jurisdictions, is “an asset representing the future economic benefits arising from other assets acquired in a business combination that are not individually identified and separately recognized”. Let us strip this definition into a language understandable by most.

Goodwill arises when an economic entity (acquirer) obtains control of another economic entity (acquiree) by commonly purchasing most of its shares in a transaction known as “business combination”. It is reflected only on the consolidated statement of financial position presented by the acquirer rather than merely on the standalone statement of financial position of acquirer or acquiree.

Briefly, it is calculated as the excess of cost of investment paid by the acquirer over the fair value of net assets (assets minus liabilities) of the acquiree. For the sake of simplicity, we will explain fair value as the current market value of the item, and historical cost as the original acquisition/recognition cost less any accumulated depreciation, amortization and impairments. Standalone statements of financial positions are mainly prepared on historical cost basis whereas business combination transactions and the subsequent consolidated statements of financial position are steered based on the fair value of assets and liabilities. To draw an inference here, say you want to buy a used Rolex watch, sellers will not ask for a sales price equal to the original purchase price less accumulated depreciation of the watch reflecting wear, tear and number of years used; however they will ask for a fair market value which is most likely more than the cost less depreciation, and sometimes you might even pay a premium to acquire the Pepsi (red and blue) Bezel model which Rolex stopped producing years ago until it decided to revive in 2014.

Evaluating the fair value of assets and liabilities acquired in the business combination is a challenging exercise which incorporates the below:

Below is an illustration of the steps to determine the revised fair value of equity in an acquisition process: 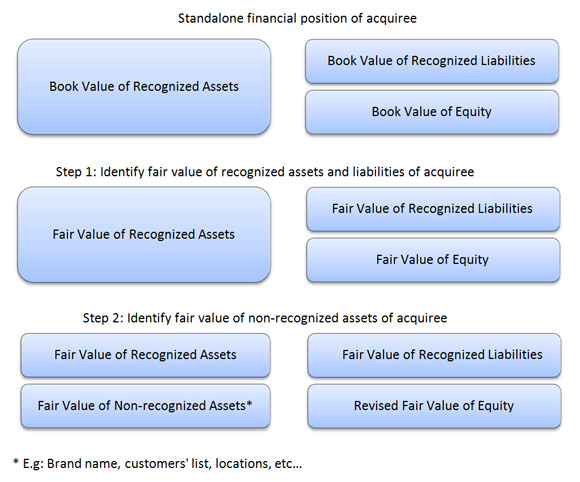 Logically, one should be fine with all the definitions of goodwill, except for the undeniably subjective part mentioning “assets not individually identified and separately recognized”, referring to fair value of non-recognized assets leaving room for Chief Financial Officers to exercise techniques in financial engineering and cosmetics, to appraise and apportion such items subjectively based on their professional judgment.

Any Chief Financial Officer who has the intention to present a better current and future financial position has the tendency to do the following:


This reminds me of a friend of mine who decided to purchase a used 2012 Porsche 911 Carrera. At the time, similar cars in the market had a market price of USD100,000. The car that caught his attention was offered for sale at USD120,000 and had the following features: terracotta red leather seats, a convertible red top, PDK dual-clutch transmission, carbon fiber handles and Bose sound system. If this car was an acquired entity, my friend would have had one of the following two options to recognize the acquisition transaction:


Tough decision?
In a nutshell, I am not saying that all companies will use the easier and more profitable approach, but the deeper you experience this component and the clearer you assess the details of its formation, the more you will be able to look at it from a commenter rather than a spectator lens. Maybe then, you might stand on my side of the room and ask, does it always reflect goodwill or could it be badwill?