George Digweed, the celebrated clay-shooting champion, claimed a record-breaking 21st world title win earlier this year in Madrid. More remarkable is the fact he assembled his tally over 4 decades; a coup of consistency unprecedented in the history of sport. In a mentally demanding discipline that requires the contestant to shoot a moving target in mid-air, Mr Digweed draws his line of vision across both ends of a shotgun barrel and a clay target - exacting perfect alignment- before pulling the trigger. The clay is reduced to dust, leaving in its wake an undisputable claim of execution excellence. Digweed has achieved an impeccable state of alignment.

Could sheer talent or the perfection of a simple eye-hand routine alone provide the ingredients behind Digweed’s supernatural streak of success? Or are there more replicable lessons for the rest of us mortals to model? Perhaps the answer is there are some practical takeaways from this feat, and high on that list is Digweed’s knack for aligning his shooting patterns with his personal vision, philosophy, lifestyle, social circles and broader surroundings. By having every single aspect of his life virtually point at that clay pigeon, Digweed probably couldn’t miss even if he wanted to. It is success of the rare sustainable breed.

Parallels can be drawn with organizations distinguished by excellence in performance. While operating in mature overcrowded markets, the likes of Emirates and Gillette (now part of Procter & Gamble) are able to hold on to their positions at the vanguard despite the cut-throat nature of their respective industries. What enables these companies to sustain a leadership position is not only their ability to achieve alignment between their strategy, operations and environment, but also an inherent flair to recalibrate whenever alignment is disturbed by change. That change may arise from within the organization, such as a change in strategy, scope of operations, organizational design or modus operandi; it may also arise from the external environment in the form of changes in the competitive landscape, technology or consumer tastes.

In this article, we provide a 4-step approach for modelling your organization on George Digweed’s recipe for success. In Step 1, we emphasize the importance of clarity in your raison d’être and in knowing exactly what your target is. Step 2 stresses the need to understand your own capabilities and to ensure that they place your target within your shooting range. Step 3 emphasizes the role of alignment and shooting straight. Finally, Step 4 highlights the importance of measuring performance and continuously recalibrating your routines in the face of change. 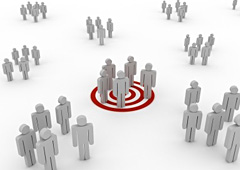 Do you really understand what drives customers to spend on your products and services or do you inadvertently subscribe to a “ready-fire-aim” approach, where you shoot first and pretend that whatever it is you hit was your intended target?

A master-class on understanding your target is presented by Ferrero upon an examination of the Italian chocolate maker’s Kinder Sorpresa, otherwise known as the Kinder Surprise Egg. Targeted at kinder (German for children), the egg’s success is in itself no surprise (pun intended). The manufacturer’s realization that chocolate, toys and a happy surprise rate highly on a child’s value scale drove the creation of a hen that lays exactly that sort of golden egg. Had, on the other hand, the target presented itself in the form of children with a vested interest limited to chocolate and toys, Ferrero would have probably been vindicated to advertise the content of the egg on the wrapping and eliminate the surprise element altogether. Faithful to its target, the Kinder Surprise Egg has been one of Ferrero’s most sustainably performing products since its creation in 1973, coincidently the same year George Digweed picked up his first shotgun.

Takeaway: By truly understanding your market, you can strengthen your offering with the appropriate design principles to reflect your target’s needs.

Step 2: Ensure that your Target is within Range 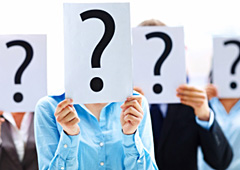 Once you are clear about your target, assess whether your people, processes and technology assets can summon sufficient inertia to reach it. A gap in any of these 3 areas must be addressed as a prerequisite for sustainable success. An inability to fill such a gap should trigger a fundamental review of your target if the intention is to hit it with consistency.

A textbook example is provided by Flickr and its success as a photo sharing website. Flickr morphed into its current form from being a mere photo sharing feature of the online roleplaying game Neverending. While Neverending failed to generate substantial profit for its developer Ludicorp, the company saw potential in facilitating photo sharing and launched as a social media website, effectively changing its target audience. Flickr went on to achieve colossal success (and was acquired by Yahoo! in 2005), reporting 87 million unique users at the time of publishing this article.

Takeaway: Take a fresh look at your core competitive competencies and ensure they place your target within the realm of the possible. 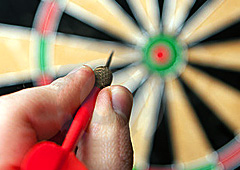 Are there capabilities in your micro or macro environment that can be recalibrated for improved alignment? To borrow an example from the public sector, we examine the case of a state owned media asset (undisclosed) that recently produced and aired a reality show filmed in a foreign country. The series did aggregate substantial viewership, rendering it financially viable. However, the fact it was shot abroad meant that one of the station’s strategic objectives to promote its own country’s heritage and national identity remained unmet. Upon this realization, the production venue was shifted to the home country and the new-found alignment enabled the media asset to nail its unmet objective almost overnight.

Takeaway: Aligning your capabilities with your target goes a long way towards optimizing value creation and sustaining success.

Step 4: Recalibrate in the Face of Change 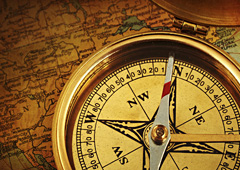 As the old adage goes, “what cannot be measured cannot be managed”. Rolling out performance management measures and control mechanisms can promote the sustainability of alignment at every level of your organization. A typical performance management process entails measuring performance, identifying anomalies, taking corrective action and sharing the lessons. Such mechanisms should be linked directly to individual performance evaluations in order to promote real accountability and facilitate change.

Marriott Vacation Club International, a subsidiary of Marriott International, provides a prototypical success story. By applying a robust performance management framework, the resort developer reported doubling its operating profits from USD150 Million to USD300 Million in the short span of 4 years between 2003 and 2007.

Success and competitive advantage can indeed be sustained on the long run through excellence in alignment. Ask yourself today, is your organization shattering clay the George Digweed way?

Ahmad Ghannoum is a Management Consultant for Meirc Training & Consulting. He is a subject matter expert on strategy and supply chain management.